If you’re looking for a powerful double bevel sliding compound miter saw with solid performance, the Hitachi C12RSH2 and the Dewalt DWS780 should definitely be on your list.

Both have some pretty helpful features that make each of them unique and functional.

On the other hand, the C12RSH2 has a more compact “zero-clearance” wall-hugging design that’s suitable for those who work in tighter space or on shallow benches. 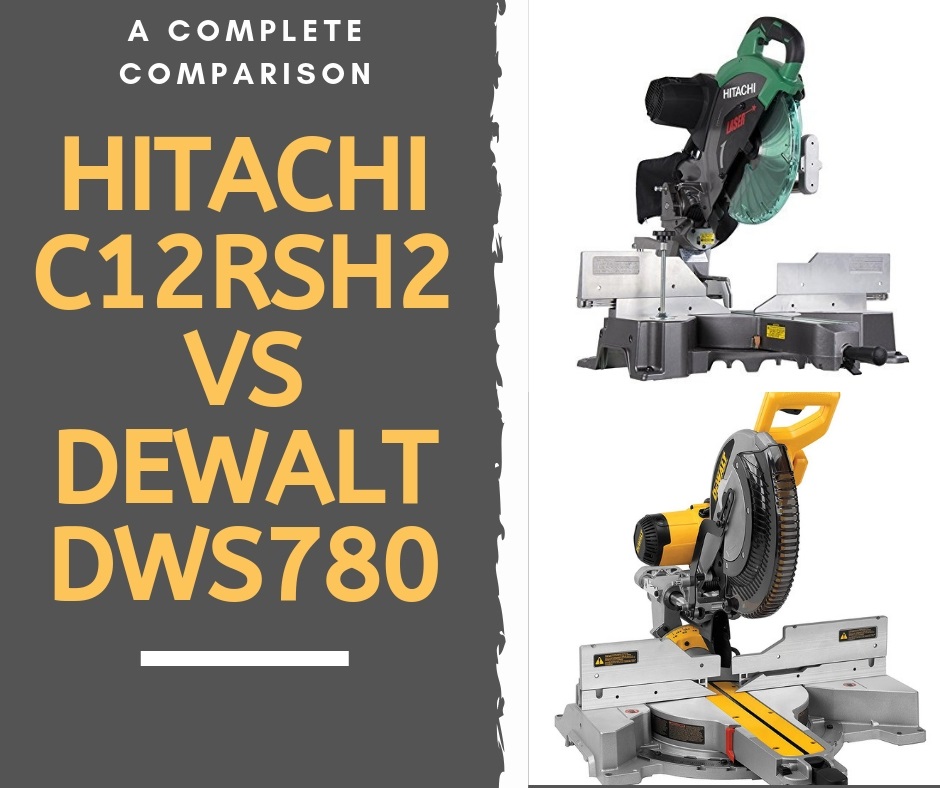 Now let’s break it down to the features you can find on a miter saw and how well each of these saws performs in these different categories.

The Dewalt DWS780 is a strong compound miter saw that’s capable of cutting through tough materials with ease.

The DWS780 can cut 4.3 inches deep and 12 inches wide –quite large enough to handle any tough pieces of lumber.

Moreover, the bronze rails provide you with more smoothness and precision.

Its single bevel angle ranges from 0 up to 49 degrees both to the left and to the right. Besides that, you can reach multiple angles quickly by using the quick release of the bevel controls.

On the other hand, its miter angle ranges from 0 to 60 degrees to the left and to 50 on the right. This is quite an impressive range when you compare it to other compound miter saws on the market.

The fence is 5.5 inches tall, so you can vertically cut sizable baseboards on it. Add to that, it can take on a nested crown of 7.5-inch length for crown molding.

The dual bevel angle’s range is from 0 to 45 degrees both to the left and to the right. This spares you the need to keep flipping the board over when you’re cutting in the opposite direction.

The only drawback is that the 45-degree max bevel angle is less than what most compound miter saws have to offer.

The fact that many wall corners aren’t exactly square shaped requires a bevel angle that’s a little bit over 45 degrees –which the Hitachi C12RSH2 falls short of.

Its 15 AMP motor enables you to spin its blade at speed of up to 3,800 rotations per minute. It may not be as much as other miter saws of the same motor power, but it does give you control over the speed.

Controlling the speed at which the blade spins allows you to pick the optimum speed to cut through the material you’re working with and doesn’t limit you to wood. You can use your DWS780 to cut through steel, plastic, and much more. It also gives you the perfect finish for any workpiece.

The Hitachi C12RSH2 blade is 12 inches so it’s suitable to take on tough tasks. It’s also capable of spinning at up to 4,000 rotations per minute with the help of the powerful 15 AMP motor.

Comfort and ease of use

In addition, the miter cam lock makes it easy to change and set the angles quickly. Add that to the existing bevel angles and you get the ability to make some of the tightest and most accurate cuts on large workpieces.

There’s an XPS shadow line cut indicator on the DWS780 that helps you make more precise cuts and lights up the material as well as the blade so you can see exactly where and what you’re cutting.

Dewalt is one of the most popular brands when it comes to power tools in general. That’s why finding spare parts or replacements for your unit wouldn’t be a very tough task and you’ll be able to get back to work right away.

The Hitachi C12RSH2 comes with fixed rails that move forward alongside the blade guard. The part that slides on these rails is the attached bearing assembly that’s positioned on the motor and blade.

A typical sliding miter saw has rails that are fixed to the saw and motor where they extend out of the back of the saw while the bearing assembly is fixed to the base.

However, Hitachi C12RSH2’s unique design reverses this mechanism. This allows you to back your Hitachi C12RSH2 up against a wall and still be able to use the sliding action to its fullest potential.

Furthermore, the Hitachi C12RSH2 has positive stops and indications on both the miter and bevel scale that allow you to easily read the measurements and adjust the settings.

Finally, it comes with a laser guide system that shows you exactly where your blade is going to fall. This helps keep you safe and makes your cuts quicker and smoother.

The Dewalt DWS780 leaves no space for safety issues. Its blade is well-covered with an automatic, large, strong cover.

Add to that, it’s never exposed except when the saw is in the process of cutting through material.

The fact that it has lights on it allows you to see well in all cases and never have to get closer to the saw to monitor your cutting process.

On a flat surface, the Dewalt DWS780 stands very sturdily with a rock-solid position thanks to its power base. This is especially important for when you’re working with larger and heavier timbers.

The Hitachi C12RSH2 gives you carbon brushes access which enables you to replace the brush whenever you need it to extend the longevity of the saw.

Its vertical handle is equipped with a soft, vibration-reducing elastomer grip that gives you comfort and full control over the unit.

Even though its dust management beats a lot of other compound miter saws’ on the market, it’s still not the best.

Not to deem it as a bad dust collector, but it’s only helpful for deflecting the dust and debris from the cutting area and for keeping the blade visible during the cutting process.

You can find a port at the back of the blade and a dust bag that collects the debris and airborne particles that come out of it.

However, it doesn’t catch that much dust with the bag alone.

If you’re really concerned with the dust collection, you can add a shop vac to collect more of the dust. But by all means, your best bet is to build a custom dust shroud or box around it.

The Dewalt DWS780 comes with a 3-year limited warranty plan, a free service contract for a year, and 90-day money back guarantee.

The Dewalt DWS780 is equipped with a rugged guard, precision-machined casting, a bevel system, fences, and a powerful stainless steel miter detent plate to reduce vibrations and wiggling during the operation of the saw.

Like most of Hitachi’s miter saws, the Hitachi C12RSH2 comes with a 5-year manufacturer’s warranty.

This is an indicator of how reliable and durable the C12RSH2 is.

At 56 pounds, it’s not the most portable option but it’s still pretty light enough to carry around if you compare it to other higher-end models.

The innovative sliding system of the Hitachi C12RSH2 minimizes its footprint and makes it the ideal choice for anyone that works in a small shop or on a shallow bench or table.

It weighs around 59 pounds, however, so it’s not the easiest saw to carry around and its weight significantly reduces its portability.

What kind of warranty do I get with the Dewalt DWS780?

You get 3 years of warranty when it comes to manufacturer defects. Moreover, you get a year of service and you can get a refund within the first 90 days of purchasing if you didn’t find the product’s performance satisfactory.

How safe is the Dewalt DWS780?

The DWS780 is one of the safest compound miter saws you’ll find on the market. The bright-colored blade is covered with a guard that keeps it away from the user.

Technically, the miter saw would work with that power supply. However, it’s better to use the one recommended by the manufacturer which is 120 V / 60 Hz in order to get the full potential of the saw’s functionality.

What’s the biggest lumber this saw can cut?

Is the laser market accurate and useful?

To a great extent. It’s adjustable for position. Which means you can aim at the cut or a little to the left or to the right of it.

Furthermore, you can also adjust its width to exceed the thickness of the saw blade’s cut.

Its accuracy is quite solid and it doesn’t use a battery.

How much space do I need for the Hitachi C12RSH2?

With the “zero wall clearance” feature that the Hitachi C12RSH2 comes with, you can back it up against a wall and still be able to use its sliding capabilities to their full potential.

Generally, both the Dewalt DWS780 and the Hitachi C12RSH2 can be used in commercial applications that require large, complex compound cuts and accurate outcomes.

So it comes down to the rest of the features. For example, if you’re looking for the more budget-friendly choice that will help you save up on both money and space, then you should go for the Hitachi C12RSH2.

As long as you’re a finish-carpentry professional or a homeowner, the C12RSH2 should serve you quite well.

However, if you’re a woodworking professional that’s looking for a saw that will handle large stock for projects like framing and deck construction or if you’re going to be making precise cuts and complex compound joints in crown molding, then you can’t skip the Dewalt DWS780.

How to Cut Plexiglass With a Circular Saw